Posted on 13 June 2016 by relationvulnerabilitylove2016 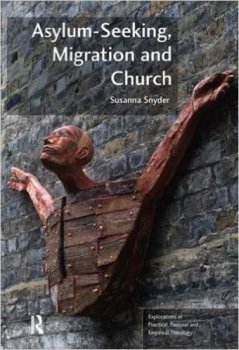 Cosmopolitanization and fear for asylum seekers

‘International migration is part of a transnational revolution that is reshaping societies and politics around the globe’ (Castles, S.; Miller, M.J. 2009). This profound ‘reshaping’ is contributing to a widespread sense of crisis within western societies, and immigrants, particularly asylum seekers, act as the focus for much of this fear and anxiety…in ‘virtually every world capital, the flow of people is regarded with alarm’ (Weiner, M. 1995). Hostility towards immigrants can be found among the general public and in the press, and governments have progressively closed national borders more tightly and introduced legislation and procedures to deter those migrants they would rather keep out…The lives of people seeking asylum are themselves also often full of fear. (351)

… People are moving in all directions across the globe, often having transnational commitments and identities rooted in more than one place, and communities are increasingly diverse in terms of culture, ethnicity and religion. Beck describes this as ‘cosmopolitanization’ – a reality not chosen as elites chose cosmopolitanism in the past – but rather a frightening sense that ‘My life, my body, my “individual existence” become part of another world, of foreign cultures, religions, histories, and global interdependencies, without my realizing or expressly wishing it’ (Beck 2006). People feel as if they are being forced into multiculturalism and engagement with those who are different. They are terrified that that world they know is shrinking before their very eyes and are determined to defend their people and their way of life. Kundnani has coined the phrase ‘kith and kin’ racism to capture this phenomenon… The fact that asylum seekers are liminal figures or strangers – near yet unknown, present but without the possibility of belonging which comes with legal refugee or immigrant status – only exacerbates this fear. (352-353)

An ecology of fear

… These fears have multiple consequences: they lead to the stereotyping of asylum seekers and to their scapegoating for wide-ranging societal problems. They become… ‘symbolic bearers of a complex pattern of change, diversification and “loss” for which they are only the most convenient scapegoats… people seeking sanctuary experience hostility in the media and from the public – sometimes violent – and they are subject to increasingly restrictive immigration policies and practices. These restrictive policies only serve to intensify the anxieties of the established population and exacerbate the fear already experienced by asylum seekers, leading to stress, depression and anxiety, and in some cases even suicide.

There is thus a vicious circle in which a number of disparate worries escalate into a generalized, widespread paranoia – something which can be called an ecology of fear. … I use ‘ecology’ here to indicate a material and ideological environment in which mutually reinforcing patterns of thinking, feeling and acting define relationships between individuals and groups. ‘Ecology’ indicates a space within which different kinds of encounter can happen. (354-355)

Ruth the Moabite, metaphorically, excellently represents ‘the other’. She was a woman in a man’s world; she was a widow and without child in a group for which infertility was a mark of shame; she was a foreigner and also an enemy – in short she represents perfectly what psychology calls ‘the repressed’. Her arrival in Bethlehem, inevitably, shakes the Judeans’ socio-political foundations. (LaCocque, 2004)

Ruth is portrayed as the ultimate stranger. What is interesting then is that it is Ruth who brings new life to Boaz, Naomi and Israel at the same time as she receives new life through her relationship with Boaz. It is perhaps no coincidence that the name ‘Ruth’ probably means ‘to water to saturation’… ‘The story of Ruth demonstrates that openness to and incorporation of the vulnerable migrant is the way of restoration or salvation… the blessing of salvation comes from without (God) not from within (ourselves).

How then does such transformation and new life come about? what makes for the ecology of faith within which the encounters between strangers take place in Ruth? Laws pertaining to the [ger], meaning sojourner or resident alien, were an important backdrop and help to explain why, for example, Ruth was allowed to glean (2:2-9, cf. Deut. 24:19). Other factors are nevertheless also significant. Personal one-to-one human encounter is key. The large proportion of dialogue compared to narration in the book suggests the importance of embodied interaction… Finally, risk-taking and courageous boundary-crossing are required on the part of the ‘stranger’ and of the ‘host’ – the person with power. (363-365)

… The connection with encounters between those seeking sanctuary and members of established populations today are perhaps obvious. Asylum seekers, while multiply on the ‘outside’, have the potential to act as bringers of new life, insight and glimpses of God. Encounters between strangers do not have to be threatening:they can be mutually transforming and enriching. The ecology of faith within which such mutual transformation can take place are rooted in hospitable laws, one-to-one embodied encounters – personal contact is vital; they allow migrants to be real – to be complex people with mixed motivations rather than simply either vulnerable or wily; and they require all involved to take risks, crossing cultural and social boundaries as well as the boundaries of self, being willing to be challenged and changed. As Volf (1996) suggested, embracing another involves welcoming, self-giving and readjusting our own identities to make space for them.

‘the greatest single antidote to violence is conversation, speaking our fears, listening to the fears of others, and in that sharing of vulnerabilities discovering a genesis of hope’ (rabbi Jonathan Sacks)

… fears ‘need to be communicated and negotiated…. It is a long-term process of building new communities, during which such fears and anxieties cannot be dismissed but need to be worked through’ (L. Sandercock, 2003).

At the same time, Christians should hold up a vision of a more hopeful future – an ecology of faith … This of course involves more than re-enacting aspects of stories of mutually enriching encounters in the Bible: it also requires the living out of theological concepts such as solidarity, justice, hospitality, the imago dei and the sacredness of family life in pastoral care, advocacy and worship. Many are already inhabiting and performing such an ecology and it is through this that … people of faith alongside asylum seekers might be able to reignite ‘utopian hopes’ and act ‘as [an] engine of social transformation’ (Forrester, D. 2001). (366).

Editors’ note:  The Lunteren Ecumenical Conference just released a statement in line with Snyder’s perspective: ‘Have no Fear’ (June 2016).

Like Loading...
This entry was posted in Being human, Vulnerability and tagged Fear, Refugees. Bookmark the permalink.